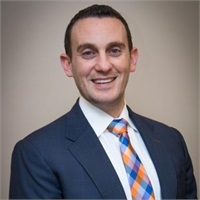 Doug realizes people don’t invest because they necessarily like investing but rather because they like to afford outside adventures, raise a family or pursue other passions in life. Doug joined BANDER Investments for the way they use out of the box thinking to deliver the industry’s best investment products and for how they offer advice tailored towards allowing clients to achieve their financial goals.

As a retirement consultant, he worked with individuals in various stages of the life cycle including recent college graduates who were changing jobs for the first time, others dealing with an unexpected layoff and also with people retiring after a successful career.

Doug was recognized for his dedication to the client experience. While at Fidelity Investments, he received awards for Owning the Outcome and Putting the Customer First. These awards exemplify his approach during each client interaction. However, he felt constrained by the limited products he was able to offer their clients and joined BANDER Investments to act as a fiduciary and make the client’s priority his top priority. He realizes that successful relationships are built upon trust and will work hard to earn the client’s trust.

Doug and his wife, Jessica, live in Parker, Colorado with their 3 children, Angelina, Tony, and Tyler. As a family, they enjoy serving in their community, skiing, boating, and playing games together.